Types of Pain from a thoracic herniated disc 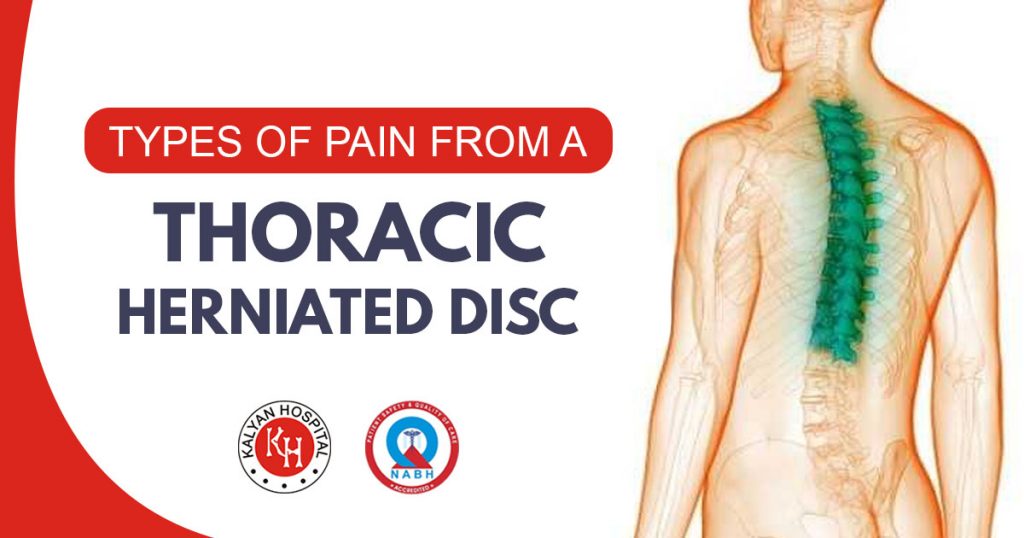 A herniated disc that occurs in the upper back is better known as a thoracic herniated disc. It is often characterized by various symptoms like pain, weakness, and numbness. It is one of the major back pain causes. The other signs besides back pain are:

Burning sensation accompanied by pain that is felt in the back region in the chest or abdomen area.

Similar pain can be felt in the legs. Feeling a tingling sensation and numbness that may be situated at or below the herniated disc’s level is also a symptom. In many cases, leg weakness and instability in the gait is also observed. Paralysis of the legs and bowel accompanied by bladder dysfunction can occur in the most severe cases.

Pain due to a thoracic herniated disc

The 12 intervertebral discs situated in the thoracic spine help in supporting and cushioning the vertebrae in the mid-back region. When the disc’s tough outer layer tears the jelly-like inner core bulges, then it leads to a herniated disc.

A herniated disc may lead to various types of pain:

Disco genic pain– Ruptured annulus fibrosus that has inflammation in the connective tissues will lead to back pain near the injury level. This pain might be misinterpreted as cardiac, pulmonary, or abdominal pain.

Muscle spasm– If there are local injuries to the intervertebral disc and the supporting ligaments, then it may lead to protective measures in the form of spasm. Muscle spasm pain can be felt at multiple levels of the back. It also results in the restriction of motion or poses difficulty in standing upright.

Radicular pain– A herniated thoracic disc with a lateral component may result in the compression of the nerves in the chest wall near the ribs and abdomen. The pain might be unilateral and like an electric shock, but it might also be mild. This pain might also feel like a band around the chest or abdomen.

The direction of disc herniation

The signs and symptoms vary according to the direction in which the herniation occurs.

A lateral herniation shows extrusion to one side. It affects the nerve root and causes radicular pain.

A Centro-lateral herniation shows extrusion to the side and also into the centre of the canal, which may affect both the nerve root and the spinal cord.

A thoracic disc herniation usually occurs at the bottom of the thoracic spine between T8 and T12.